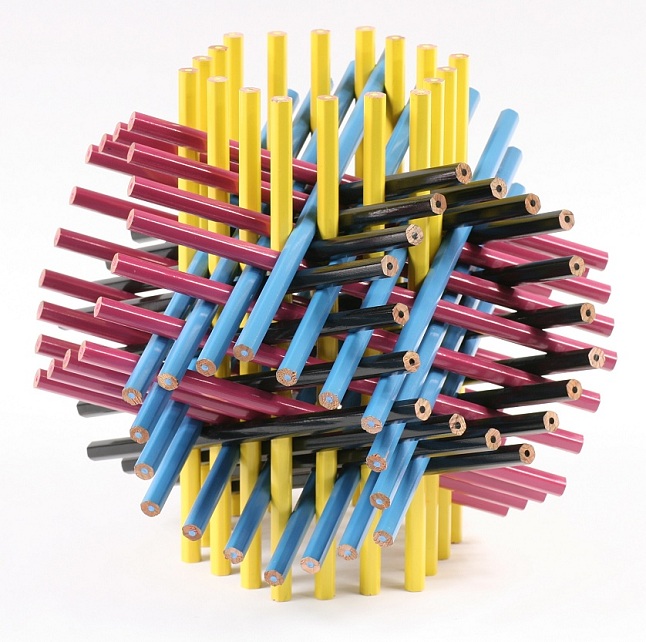 :{PETE WHEELER}:
www.facebook.com/wheelsdj
www.buttoneddowndisco.com/deejays.htm
Buttoned Down Disco’s own Pete Wheeler will be joining us at The Lyttelton, before strolling across the road to play
the excellent BDD at KOKO.

:{JAPAN TSUNAMI APPEAL}:
www.redcross.org.uk
“The massive earthquake and resulting tsunami that struck Japan on 11 March have caused widespread destruction and suffering. More than 8,000 people have died in the disaster, thousands are injured and at least 12,000 are missing. Many people are living in evacuation centres as 14,000 homes have been destroyed and around 100,000 are damaged. The Japanese Red Cross has been on the ground since the disaster began and has sent 230 response teams to provide first aid and emergency healthcare, as well as distributing relief items. The teams are made up of more than 1,200 staff, including doctors and nurses.”

:{72 PENCILS}: by George W. Hart [2008]
www.georgehart.com
“72 Pencils is a geometric construction of 72 pencils, assembled into a work of art. The form is an arrangement of four intersecting hexagonal tubes that penetrate each other in a fascinating three-dimensional lattice. Each of the sculptures in the edition is constructed with a different type of pencil, so each is a one-of-a-kind object. The one shown above is made with CMYK pencils. This idea is due to Jeff Rutzky, an NYC designer who often works with printers in the CMYK color space. For some viewers, part of the interest lies in the form of the interior. The four hexagonal tubes are hollow, so the sculpture as a whole is hollow. But, what shape is its cavity? What would someone on the inside see? To the mathematician, the answer is “the rhombic dodecahedron,” a geometric solid bounded by twelve rhombuses.”